Speakers confirmed so far are:

There are now going to be 2 double decker buses visiting the Public Event - The People United and the TUC's Austerity Uncovered Bus will both be there.

The NHS will be 65 on 5th July - will Weston Hospital make it to 66 in the NHS? - come to Rafters Restaurant in the Hospital between 11 am and 2 pm for some celebration cake.

Meetings for UNISON members at Weston Hospital on 8th July:

Weston Labour Party have set up an online petition:
http://you.38degrees.org.uk/petitions/stop-privatisation-of-weston-general-hospital-weston-super-mare

We're getting some media and blog coverage:

Pam Field has written an article for Think Left:
http://think-left.org/2013/06/21/peoples-fight-to-save-local-hospital-from-the-moneymen/

The Socialist Health Association have added info to their website:
http://www.sochealth.co.uk/events/keep-weston-general-hospital-in-the-nhs/
Posted by North Somerset UNISON Communications Officer at 17:36 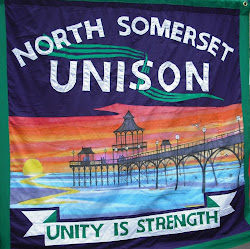